Compound Interest Calculator How can your savings grow over time?

Regular savings calculator How much money can you accumulate over time?

Inflation calculator How will inflation decrease the value of your assets?

Inflation is a process of the decline of purchasing power of money over time. It is manifested by an increase in the prices of goods and services. Inflation is expressed as a percentage increase of the average price level of a fixed basket of services and goods.

The most common cause is an increase in the money supply and its rapid pace of circulation in the economy. 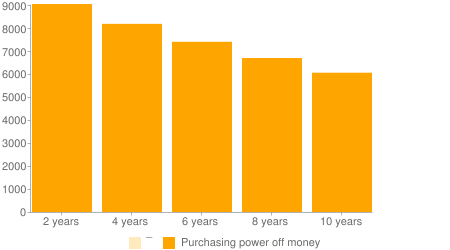 The inflation calculator is an online tool that allows you to determine the future purchasing value of your assets according to the indicated inflation rate.

Using this tool you can:

The main breakdown of inflation types is based on the rate of price increases in the economy, as it can reach different levels depending on circumstances. The dominant point of view among economists is that the most favorable type of inflation is slow growth of prices which encourages people and companies to invest rather than accumulate cash.

There is one more type - deflation. This is the opposite of inflation and  it is characterized by an increase of purchasing power of money.

Deflation causes noticeable drops in the level of prices on the market. As a result, if this phenomenon is maintained for a long time, it leads to stagnation in the economy.

While lowering prices in the market may be a desirable situation for consumers, it is safe to avoid falling prices, because it discourages investment and impacts long term growth prospects of the economy.

The causes of inflation

By tracking past events related to the increases in inflation, several situations can be distinguished that have a profound impact on this indicator. As a result we can list the following causes of decreasing purchasing power of a currency:

Central banks are institutions responsible for monitoring the level of inflation and preventing it from exceeding certain levels. Each country or monetary union has its own body responsible for ensuring healthy levels of inflation. In the United States this duty is held by the Federal Reserve (FED), while in the Euro Zone by the European Central Bank.

The scope of the central bank's capabilities includes not only establishing and implementing the state's monetary policy, but also setting the level of basic interest rates. In its actions, it must take into account the inflation target, which aims to keep inflation at a certain level.

In most countries, it is assumed that inflation should vary between 1 to 3%. It is vital to remember that inflation has a huge impact on interest rates, deposits, loans and bonds.

In the case of deposits, it should be taken into account that the interest rates offered by banks usually reach the minimum values ​​that reflect the lack of possible threats to the invested money. Then, with the increasing level of inflation, there occurs a situation where deposits are no longer a profitable solution. Money deposited in a savings account over a period of time will lose much more value due to inflation than would be earned during that time. Banks very rarely decide to raise the interest rate on the offered deposits so that they are adequate to the inflation level in the country.

Inflation has an even greater impact on the interest rate of loans. As inflation rises, interest rates go up and annual interest rates of loans go up accordingly. As a consequence, the loan installment increases for borrowers.

Inflation also affects bond yields. Raising the inflation rate, and thus the interest rates, results in the necessity to pay more investors who own treasury bonds. This applies to inflation-indexed bonds in particular.

How to protect savings from inflation

The recent rises in the level of inflation effectively encourage people to make decisions about investing their savings. However, in the current situation, the opportunities offered by the market should be analyzed with particular care. Deposits or savings accounts are an example of one of the worst scenarios of investing money today. It should be remembered that their interest rate is already below any profitability margin.

The current level of inflation significantly exceeds the potential gains from safe financial products. Deposits and savings accounts do not provide any protection for your capital. At the same time, when deciding to buy treasury bonds, one should remember that they protect capital only up to a certain level of inflation. Hence, it is a good idea to use an inflation calculator before finalizing your purchase.

Certainly, it is a very good move to invest in real assets that offer higher protection from losing the purchasing power of money. For those looking to protect their money from inflation, the following investments should be considered:

Is inflation a bad phenomenon?

Economists have been arguing about the assessment of inflation for years. Until recently, the perception was that inflation was bad for the economy. In particular, it referred to the situation where the rise in inflation led to a severe economic crisis. However, based on modern knowledge and the functioning of world economies, it is not possible to unequivocally assess inflation. Certainly, keeping inflation low is beneficial as it encourages those with savings to invest. This way of operating is beneficial to both the economy and society.

The benefits of inflation fade away when it starts to spin out of control. Then the situation begins to take a dramatic turn for the economy. A momentary lapse of attention by those responsible for controlling the inflation level is enough for the index to soar. High rises in prices are ruining citizens' savings. As a result, the economic situation can become complicated, which has been shown throughout  history to potentially even  lead to the destruction of markets.

Inflation is an economic phenomenon that everyone has to get used to. It should be borne in mind that inflation remains an inseparable companion of markets. The inability to avoid the impact of inflation on life speaks in favor of using the inflation calculator, because this way you can control the impact of this indicator on your capital. Monitoring the state of savings while controlling the level of inflation makes it possible to choose a more profitable solution and adjust your investing strategy.